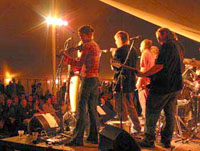 LSO at Priddy Folk Fayre, 2003 little bites from the longer bits… “you guys were great… you blew us away… a breath of fresh air!”

“more Pogues than Levellers, but with touches of the Clash… was it folk? I don't know. It was music, and it was damn good. Lets leave the marketing definitions to Sony”

“Somebody give them a recording contract. I have seen the future”

“The band that made the walls shake”

“reaches the parts that others fail to reach”

Priddy Folk Fayre, 2003
“What can we say about this band from Derbyshire… they were musically and visually very exciting, and they completely sold out of all their Dawn Bird CDs on the day… what better proof can you have as to how they were appreciated.”

Priddy Folk Fayre, 2002 (audience members)
“…we thought you guys were great at Priddy! You blew us away! We were the couple dancing at the back… We bought Dawnbird and have played it every day since the weekend! … We thought you were a breath of fresh air!”

- Rob and Joy Jolliffe (in a letter to Simon, LSO manager)

at Broadstairs Folk Week
“Occasionally a demo CD reaches the parts that others fail to reach, and in 2001 Dawnbird, sent on spec by a band with the attention-grabbing name of Loscoe State Opera reached those parts…

“The performances at Broadstairs Folk Week exceeded the expectations. From the first appearance of this young, dynamic and very talented band on stage, to the last haunting notes of the whistle which stayed in my head for many hours after their late night bash, this was a band which did not disappoint. With a new slant on many familiar tunes, and with some exciting new material, Loscoe State Opera broke the boundaries of tradition and provided brilliant music which got us all up and dancing. This is one band that I will be booking again, and I recommend others to give them a listen, pick up the phone, and book them!”

at the Flowerpot Derby
“Folk is a bad word. It conjures up images of sold out hippies, real Ale fascism and C & A designer scruffiness. It is middle aged and middle classed. As an interest, it is only marginally more credible than trainspotting. The first time I saw Loscoe State Opera was in a photo in Home Cooking early last year. There they were the seven of them, all looking as mean as you like. One of them was wearing a top hat. They look a groovy bunch of bastards, I thought. I will have to go and see them. Last weekend I finally got round to it. They took the stage to a fairly full Flowerpot, looking if anything more mutinous and piratical than they had done in the photo. They kicked into the first number, an old anti-war song but banged up to about twice it's normal speed and shot through with a genuine anger, a genuine feeling that the poor are generally sold down the river in order to keep the arms industry and the stock market doing very nicely thank you very much. Their last song was the absolute opposite: a dangerously metal Turkish dance thing; genuine acoustic hardcore. In between they moved from the mellow to the Bacchanalian, mixing traditional songs with their own stuff. They are more Pogues than Levellers, but with touches of the Clash. They are tight as hell but they don't make a fuss about it, or about the fact that four of the seven can sing, and sing well. They read each other musically in a way that comes only from practising a great deal and leaving your ego at home. People danced.

“Loscoe State Opera play with guts and feeling and vitality. They play old songs, but they fire them up with adrenaline and love and juice and justice. They play them like they were written yesterday. And was it folk? I don't know. It was music, and it was damn good. Lets leave the marketing definitions to Sony.”

at the Vic Derby
“The bloke from Virgin records rang the Fat bloke last week and asked me to check out their new hot act (The Family of Free Love), he thought I would be impressed. I wasn't they were crap. Lets talk instead of the best band I've seen in f.......g ages. The ridiculously named Loscoe State Opera, try and imagine Hawkwind meet the Chieftains in a dark alley, whilst getting mugged by Fairport Convention and hit on the head by the Oyster Band. They played mostly their own stuff and every song had something to commend it. You know those gigs where you want to go on all night, that make you rant and rave all the way to the bus stop? That make you waffle on at great length to your uncomprehending mates the next day? Well this was such a gig. Apparently this was only their second gig, this time next year they should be headlining the main stage at Glastonbury on the Sunday night.

“Somebody give these guys and gal a recording contract. I have seen the future.”

Bakewell Arts Festival
“The band that made the walls shake… Loscoe State Opera play a heady mix of folk and roots music, powered along by a drum and bass rhythm section with only one aim in mind - to get the audience dancing!”

Dawnbird CD Review - Folk Roots
“A couple of years back, a demo tape dropped through my letter box: it was really rough house stuff, filled with sledge-hammer guitars, howling renditions of trad tunes. Noisy but screaming promise with each passing minute. Those responsible went by the assuredly odd name of Loscoe State Opera, conjuring up images of Stalin inspired classicists. Their true origin is equally bizarre, six total strangers meeting for a jam in the blown out miners welfare hall of a Derbyshire pit village. Now here's the first official CD, and its a bit of a belter.

“The same fire that blazed on the demo has been channelled into a creative flame which arranges stuff as hackneyed as Step it out Mary, Jennie's Chickens or The Butterfly into new, near vital renderings. They even give Peter Bellamy's Fiddlers Hill an almighty kick up the jacksie.

“Subtle isn't a word that readily springs to mind, but Ben Daglish has an earthy enough voice to ground him whilst Dave Everitt's guitar work echoes high and spirals between keen leads and psycho feedback. Andy Martin wades in there pumping a Melodeon as flutes from Kate Rounding flit around the Jig of Slurs. No slouches when it comes to writing themselves, Hidden Beauty is heavy enough to impress at the close.

Folking.com
“About time we saw this gig! I can't believe we've missed this band! We're just gob smacked. Give us your gig list and we're on it, I can't wait…”